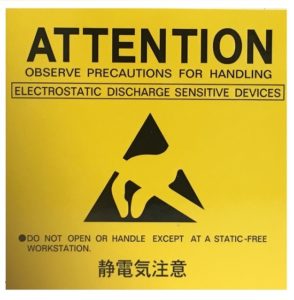 This time, we would like to discuss about static electricity.
Static electricity is occurring everywhere without one being aware of it. For example, while walking on a carpet, it is said that electrostatic charges could be 1.5kV under the humidity of 65-90%, and reaches 35kV when humidity at 10-20%. There is an image that static electricity is generated by rubbing the object strongly but it also occurs by the slight rub of clothes caused by the movement of people or gentle wind, and it has the potential to occur everywhere and at any time. Also, even when electrostatic discharge from the fingertip happens, it is said that it does not perceive the discharge when the charging is 1kV, and does not feel a pain even at 2kV. In other words, since static electricity is charged to the body unknowingly and discharged from the fingertip unknowingly, it might possibly have damaged the Orange Pot and the Encoder without being noticed by the cycle of charging and discharging.

*For this measure, if the product is to be provided with the connector, static electricity will hardly invade from the tip of the wire.